Below you will find fine examples of Native American Indian basket culture - how the different types of baskets were used and the tribes that created them. Represented are beautiful and historic photos of Native Americans actually using baskets in everyday life as they had done for generations along with an example of the baskets being used. 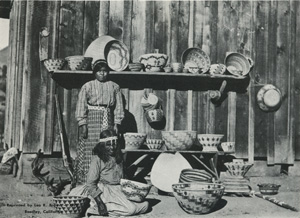 Also known as a "money basket" (because people kept their valuable shell-money or beads in them), this basket took many forms throughout Native California. The bottleneck-shaped basket of the Yokuts, Shoshone, Kawaiisu and Tubatulabal may have originated as a twined basket, hung from a strap inside the home. Coiled versions of this basket became a popular genre for the art market and were made in great numbers, exhibiting the finest weaving and artistry.

Small, globular baskets might serve a variety of needs: storing personal valuables or given as a gift for occasions ranging from birth, marriage, coming of age, or as an offering at death. This form also became the most popular genre of basket made for the art and collectors market between 1890 and 1920.

Used in conjunction with a close-twined burden basket the beater dislodged seeds from the plant, sending them into the open mouth of the burden basket.

For interior storage of various dried foods and household items. Some tribal communities also constructed large outdoor granaries for the long term storage of acorns and other foods.

Women's caps were made and worn in several regions of California. In general, the cap protected the head from chafing caused by the tumpline of a burden basket. In the Great Basin, the large size of a Paiute woman's cap added protection from the sun, and also kept pitch out of the hair when collecting pine nuts during annual harvests. Caps were also used as units of measure for tobacco, seeds, and other materials. The Hupa, Yurok and Karuk recognize four genres of caps: work, dress, widow's, and men's. All four have recognizable features — either In design, shape, or use of weaving materials.

Used primarily to boil acorn soup. Hot stones are plucked from a fire with a pair of wooden tongs and put into a basket containing leached acorn dough and water. The mixture is quickly brought to a boil. Cooking baskets ranged in size depending upon the amount of soup needed. An additional cooking basket, filled with water, is set aside to quickly immerse the hot stones, removing any ash from the fire, before they are dropped into the primary cooking basket.

Some baskets have purely ceremonial use. Among the Hupa, Yurok, and Karuk, cylindrical baskets are held by male performers in the Jump Dance. Baskets also held water for the ceremonial washing of mourners at a funeral; contained medicine used in healing ceremonies; or served as a drum to accompany singers praying for a good acorn crop.

Sturdy, open-work baskets made entirely of strong sticks were used primarily for collecting and transporting larger resources such as acorns and firewood.

Sits atop a stone mortar as acorns are pounded into flour. The basket helps prevent pieces of acorn from scattering and keeps foreign objects out. The hopper is held in place by resting one's calves on the basket's reinforced rim.

The Pomo made a certain basket to be used for the ceremonial washing of an infant a month following its birth. This basket form was also used in Pomo puberty ceremonies, to wash the young woman following a month long seclusion at the onset of menses.

Native people in Northwestern California made very large trays to serve as a catch basin for acorn flour. A heavy stone mortar with basket hopper was placed on the tray and the acorn meats were pounded into flour. As the flour became fine, it was periodically swept into the tray to be resifted later. The structural integrity of Native basketry is exemplified by the flour tray which was subjected to significant stress.

Seeds were rubbed and loosened from their husks in slightly concave trays then tossed into the air so the wind might help separate the lighter husks from the seed kernel. The clean seeds were then parched by tossing and moving hot coals among the seeds, all within the tray.

Though any basket may serve as a gift, finely woven baskets, often richly embellished with tiny, colorful bird feathers and shell beads or pendants, served as esteemed gifts. They were essential components of a dowry, family exchanges commemorating the birth of a child, as trade items for other valuables, or payment of a debt.

The Native people of Northwestern California made specific baskets to hold tobacco. The basket includes a lid, laced on with buckskin thongs. A characteristic of the tobacco basket was its conservative design - usually an alternation of bear grass and conifer root giving the basket either an all-over speckled appearance, or a striped design. The Hupa cultivated tobacco, casting the seeds on a piece of prepared ground. Tobacco was smoked in short, straight wooden pipes, primarily by men, often with ceremonial or religious purpose.

Large, elaborately designed trays were made in various regions of Native California for use in gambling games. The Yokuts made large flat trays as a surface for the women's dice game. The Hupa, Yurok, and Karuk use a deep tray to hold money wagered in the guessing-gambling game known as "Indian cards." The Modoc use large decorative trays to hide a pair of gambling bones as they choose which hand to place the marked or unmarked bone.

Throughout the arid Eastern Sierra, Paiute and Shoshone people wove a basket designed to carry and store water. The water bottle was coated with a mixture of melted pine resin and finely sifted red earth. Small water bottles functioned as canteens, carried with a strap. Larger bottles stored a household's water supply. The unique shape of the basket ensured its stability. The broad mid-section acted as a fulcrum, allowing water to flow out, then immediately tipped the basket back to its former position, minimizing spillage. Large un-pitched bottles were also used for seed storage.

Made to hold and transport babies were common throughout California. Cradle basket styles may vary significantly from one tribal community to another. The cradle basket remains the most widely used basket in Native California today.

Individual soup or food bowls often followed the same form and conventions as the cooking vessel. Among the Yurok, Karuk, and Hupa, three different soup bowls were recognized; men's, women's, and children's.